Monday 20 January 2020
International enrolments in UK higher education were up for the second year in a row in 2018/19, by roughly 6%, to reach a record high of 485,645 students. The previous year, 2017/18, had witnessed a relatively modest 4% uptick.
The latest Higher Education Statistics Agency (HESA) data shows a slight increase in new students coming from EU countries (2%) with larger gains coming from markets outside the European Union (10%). Non-EU first-year student numbers grew by 18,475 between 2017/18 and 2018/19, with most of this increase at the postgraduate level.
Fully one in five students in UK higher education institutions today are from countries outside the UK.
England’s Universities Minister, Chris Skidmore, said of the news,
“I am delighted to see a continued increase in both EU and non-EU students, and we want to grow the number of international students to 600,000 by 2030. Our universities thrive on being open, global institutions, which is why we’re allowing international students to remain in the UK for two-years post-graduation.”
The top ten sending markets for UK higher education are summarised below, with the total enrolment for 2018/19 and year-over-year change from 2017/18 shown for each.
China (120,385, +13%)
India (26,685, +35%)
United States (20,120, +7%)
Hong Kong (16,135, -1%)
Malaysia (13,835, -8%)
Italy (13,965, 0%)
France (13,675, 0%
Germany (13,475, -1%)
Nigeria (10,645, +1%)
Greece (9,920, -2%)
Chinese student numbers grow again
Of the more-than 342,000 foreign students that enrolled in UK higher education from outside of the EU, 35% came from China in 2018/19. The 120,385 students from China represent a 34% increase from this key sending market since 2014/15, underlining the growing importance of the Chinese market for British institutions.
At the same time, Indian student numbers also rose significantly in 2018/19, continuing a welcome rebound for this market that began the previous year. There were 26,685 Indian students in UK higher education institutions in 2018/19, up from 19,750 in 2017/18 and 16,550 the previous year.
“The 42% growth in the number of new Indian student enrolments in 2018/19 is particularly notable,” said Universities UK International Director Vivienne Stern. “Visa application numbers indicate that this growth will continue, suggesting that Indian student numbers are set to reach numbers not seen since 2011 in the coming years. We know that students in India, and around the world, will be encouraged by the announcement of a new two-year graduate visa route and we are working with government to ensure that this is implemented as quickly and smoothly as possible.”
Another important non-EU market, Nigeria, sent fewer students in 2018/19 yet again: there has been a 41% decline in this market over the five-year period beginning in 2014/15. Nigeria is now the sixth most important non-EU market for UK institutions, behind China, India, the US, Hong Kong, and Malaysia. 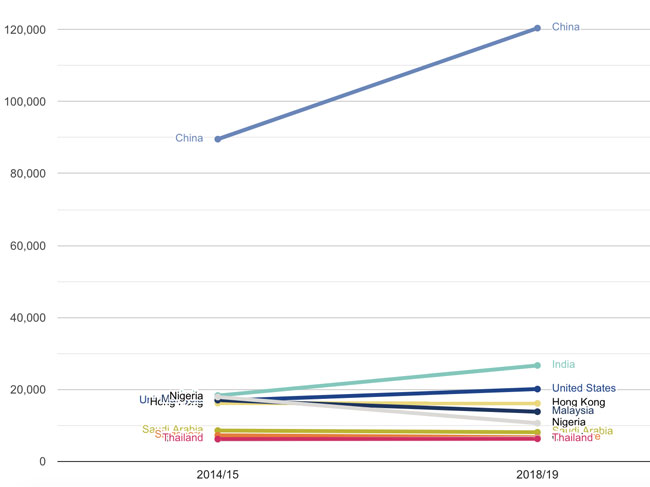 Enrolment in British higher education by leading non-EU sending market, 2014/15–2018/19. Source: HESA
EU student trends
There were 143,025 students from other EU countries studying at the undergraduate and graduate levels in the UK in 2018/19, representing roughly 30% of the total international student population.
Italian student numbers continue to rise for UK universities, with 13,965 Italian students enrolled in 2018/19, followed closely by French (13,675) and German (13,475) students. As the following chart reflects, the number of Italians in UK universities has greatly increased since 2014/15 while the number of Germans has declined over the same period. 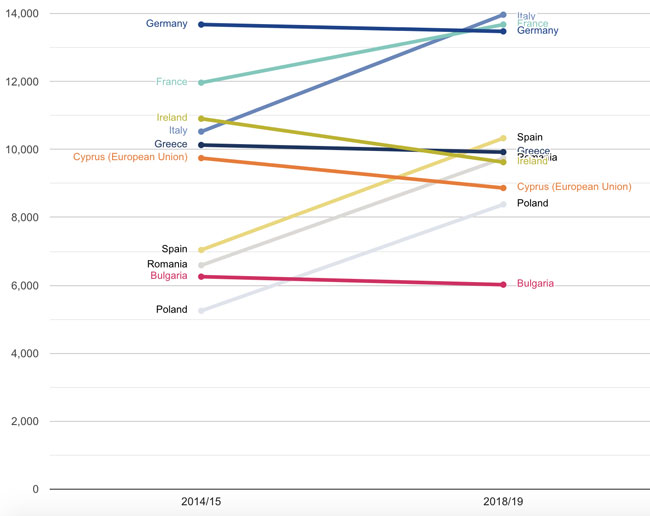 Enrolment in British higher education by leading EU sending market, 2014/15–2018/19. Source: HESA
Spain, Romania, and Poland have also become increasingly important markets for UK educators in the past five years, and Portugal sent twice as many new students in 2018/19 (2,955) as in 2014/15 (1,265).
Sector buoyed by post-study work visas
Last fall, the UK government restored post-study work rights, which provides that foreign students who graduate from a recognised UK university are now eligible to stay on in the country for two years.
The university sector had long been campaigning for this important policy shift, acutely aware that both Canada and Australia have become much more competitive in recent years as a result of their more welcoming immigration policies. HESA data for 2019/20 will be particularly interesting to observe in light of the restoration of post-study work rights as well as the continuing Brexit process.
Driving economic impact
The strengthening enrolment trend for British higher education underpins the sector’s key role in the economic impact of international education. A recent Department of Education analysis estimates the value of total education exports, including transnational education programmes, at £21.4 billion for 2017 (US$27.9 billion).
As reflected in the chart below, higher education accounted for roughly two-thirds of that total export value, or £14.4 billion (US$18.8 billion).