The percentage of enrolments that are facilitated by agents also varies across the top student nationalities for Australia as detailed in Table 1. Notably, emerging partner countries such as Nepal, Brazil and Colombia have a larger proportion of enrolments facilitated by agents, compared to more established partner countries such as China, India and Malaysia. 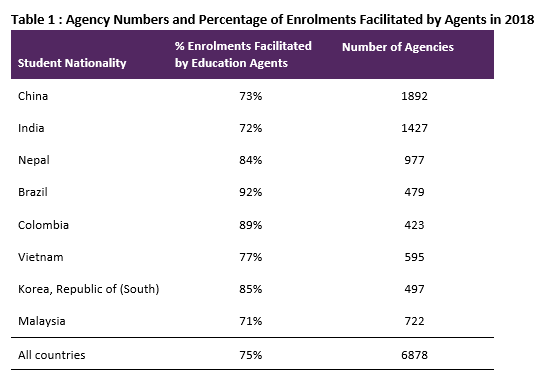 The incompletion rate for an agency reflects the student outcomes for enrolments facilitated by that agency.
Interestingly, Australia’s top three source nations for international students – China, India and Nepal – have the highest proportion of education agencies with high student incompletion rates:

While the federal government’s ‘crackdown’ on dodgy education agents is all well as good, the underlying driver of the decline in entry standards is the education institutions themselves. That is, they have sought to swell international student enrolments by entering markets where document fraud and cheating is commonplace.
If you don’t believe me, here’s the NSW Independent Commission Against Corruption:
In the search for international students, some universities in NSW are entering markets where document fraud and cheating on English-language proficiency tests are known to exist. They are using large numbers of local intermediaries – sometimes more than 200 agents – to market to and recruit students, resulting in due diligence and control challenges…
False entry qualifications, cheating on English-language proficiency tests, essay mills selling assignments, plagiarism, cheating in university exams and paying others to sit exams are reportedly common.
Publishing education agent data cannot undo the underlying incentive to degrade entry and teaching standards to maximise student fees.